Sitting here in the Athenian heatwave (+35C) in the middle of September deeply inspired and empowered once again after this years Athens Democracy Forum that New York Times arranges for the fifth year. I arrived after an interesting encounter on the plane with a woman, another Alexandra, that has been working with the refugee crisis both in Sweden and Greece. We were both quite pessimistic of where this world is heading.

”So what  brings you to Athens this time?” the cabdriver asked me. When I told him I was going to moderate and participate at the Democracy Forum he answered: ”You mean the Hypocrisy Forum. Or the Kleptocracy Forum”. The loss and lack of trust in democracy and justice was also one of the main topics during the forum.

Great speakers from different parts of the world  – struggling for a better and brighter future in their different fields gathered and gave me hope.

The topic was solutions for a changing world. A rapidly and radically changing world with growing gaps and escalating inequalities that leaves many people behind. With polarisation and populism spreading like a disease from countries in financial crisis to countries with identity crisis. Although it’s not always easy to define the difference between pure populism and popular democracy where politicians listen to their demos. Their voters. Their citizens. Their people.

Achilles Tsaltas, vice president at NY Times Conferences, the soul of Athens Democracy Forum, took us back where it all started in his welcome speech. To the agoras and all these guys that designed democracy under the creative climate of hot hellenic sun and blue sky. Achilles himself a son to poor and ambitious Greek migrants in Australia has since then replaced his roots to Hong Kong, Paris and now London while he’s travelling around the world to organise this forum and other conferences. 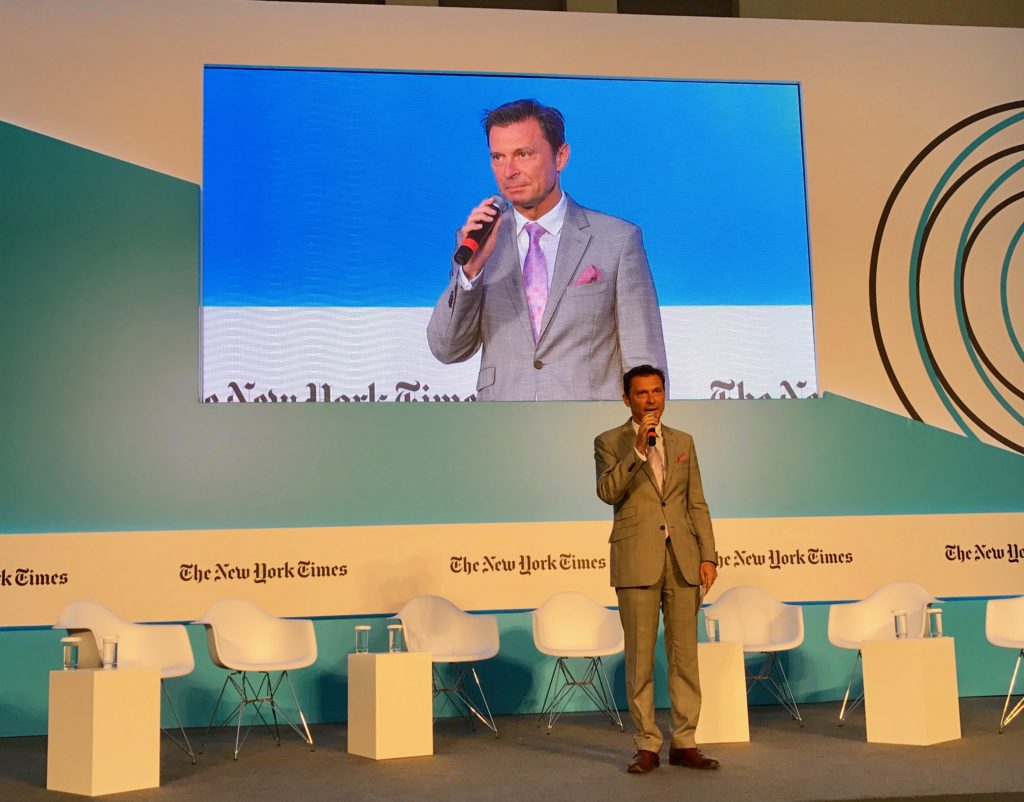 Mark Thompson, CEO and president at the New York Times opened the conference by talking about my favourite topic- the importance of diversity and inclusion and how it enriches not only newsrooms. We have to strive against monoculture, was his message. (And yes, I got an exclusive interview with this very humble yet worldly man. Soon to be published in a Swedish newspaper)

Dr. Philip Fernbach delivered advice on how we can practice a more positive and constructive discourse by explaining rather than advocating. He suggests we should focus more on the consequences than the values and practice intellectual humility.

Kofi Annan, former Secretary General of the UN talked about people feeling neglected and that good leaders should not only lead but also follow and listen.

David Van Reybrouck, a bestseller writer, tried to convince us that we need to move beyond elections – to lottery. He talked about Democratic fatigue as a symptom of distrust. So we should democratise democracy and give more people a voice. ”It’s not only about your vote – it’s also about your voice”.

The troubling Eastern and Central Europe was on the agenda and here Ivan Krastev delivered the paradox: ”In eastern Europe we have a strong anti-migrant and refuge consensus in the absensce of migrants and refugees”.

Kerry Kennedy delivered messages of hope and reminded us that change is possible if we get together. History is filled with small groups of dedicated and determined people that changed history. From social movements to womens marches to Apartheid. Even if everyone tried to stop them. 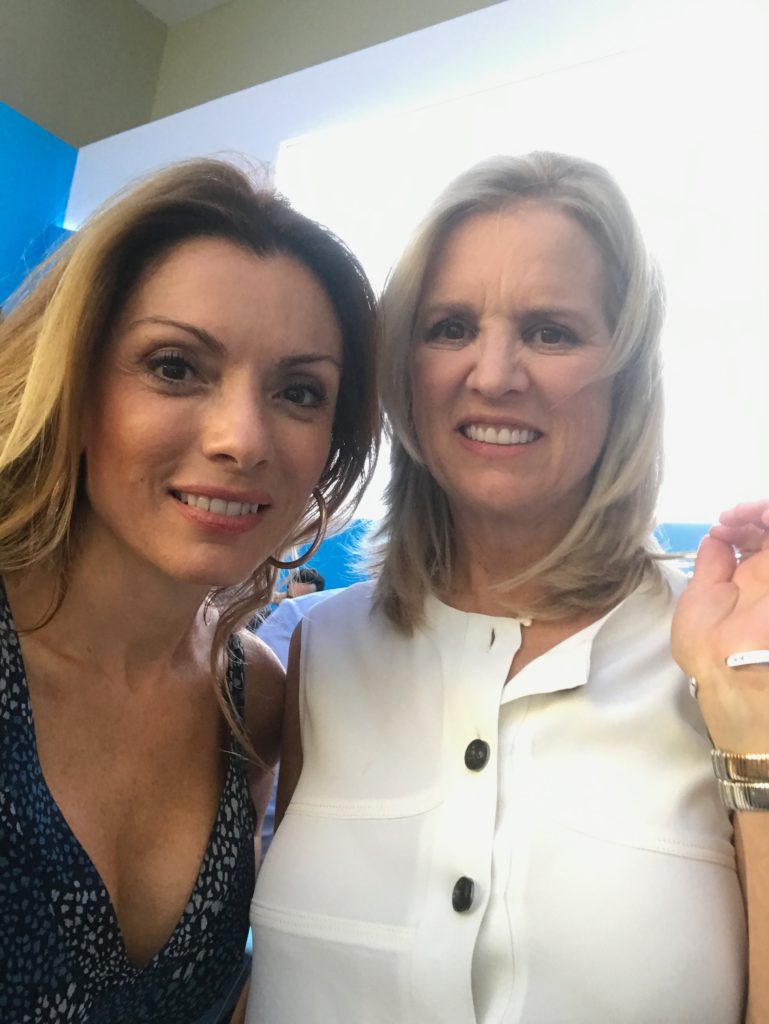 Three foreign minister, Margot Wallström from Sweden, Amina Mohamed from Kenya and Pavlo Klimkin from Ukraine discussed the current situation. Margot Wallström who introduced feminism into foreign policy also gave a keynote speech while the genius cartoonist Patrick Chappatte kicked it of with a rhetoric question:

”Do you know what Mythology is?

Mythology is saying the Greeks are going to pay back their loans”.

And then revealing todays absurdity in politics: 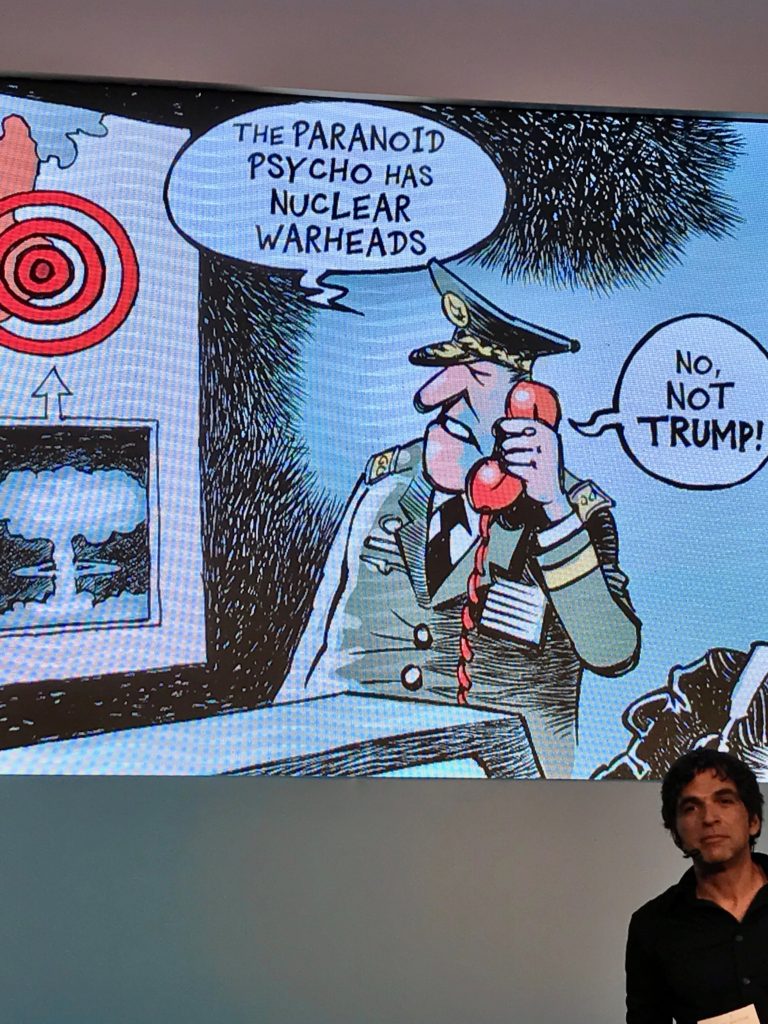 Professor He Jiahong, Director of the Center for Anti-Corruption and Rule of Law at The School of Law, Renmin University of China explained why western style liberal democracy isn’t really adaptable and suitable for China. ”If we had 50 parties we’d soon have a civil war that would split the country and then myriads of Chinese refugees”, he warned.

One of the strongest moments was when the young human rights activist, Hyeonseo Lee, shared her story about the terrifying escape from the North Korean inferno to China and then to South Korea. First time she saw a public execution was when she was only seven years old. That was only one of many misanthropic methods of spreading fear among the people. Lee has written ”The Girl with Seven Names: A North Korean Defector’s Story” that I’m currently reading and I strongly recommend. 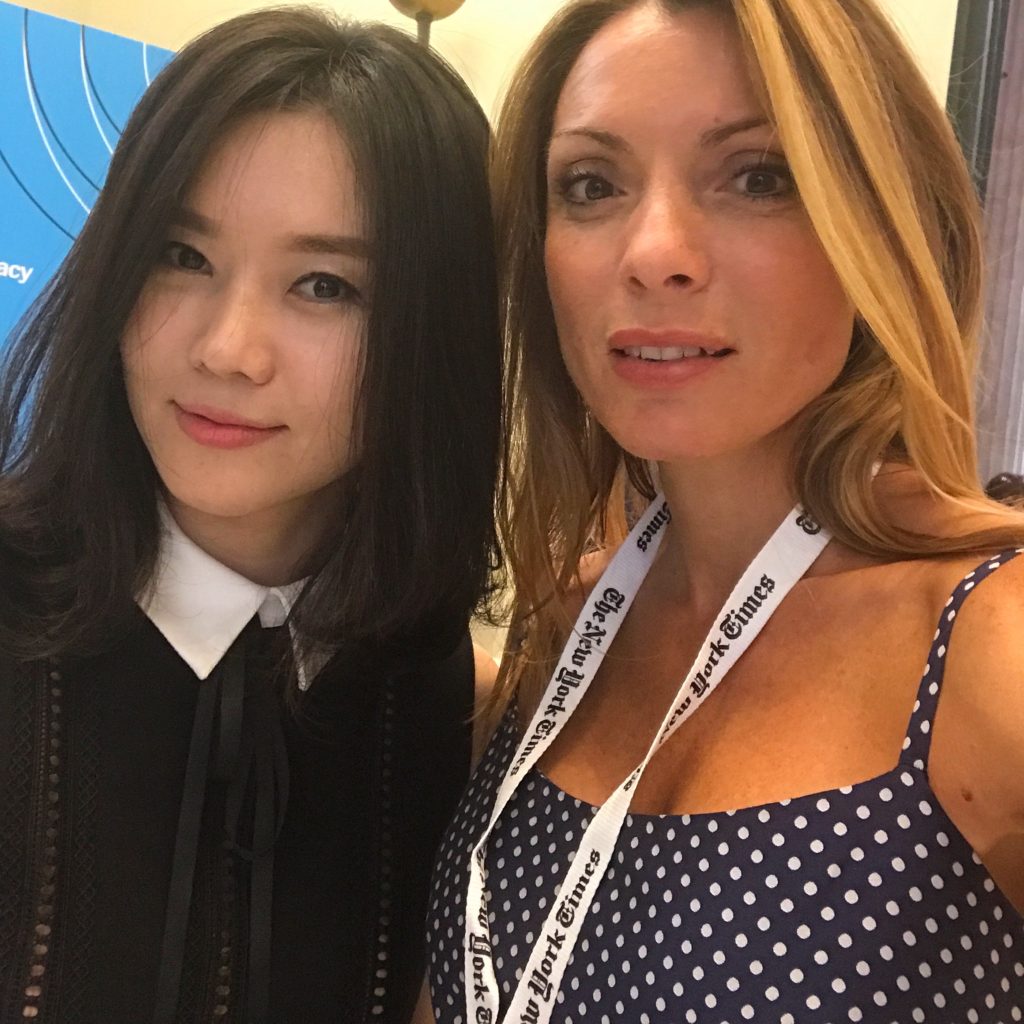 I also had the chance to talk to students from 18 countries – from US to India. 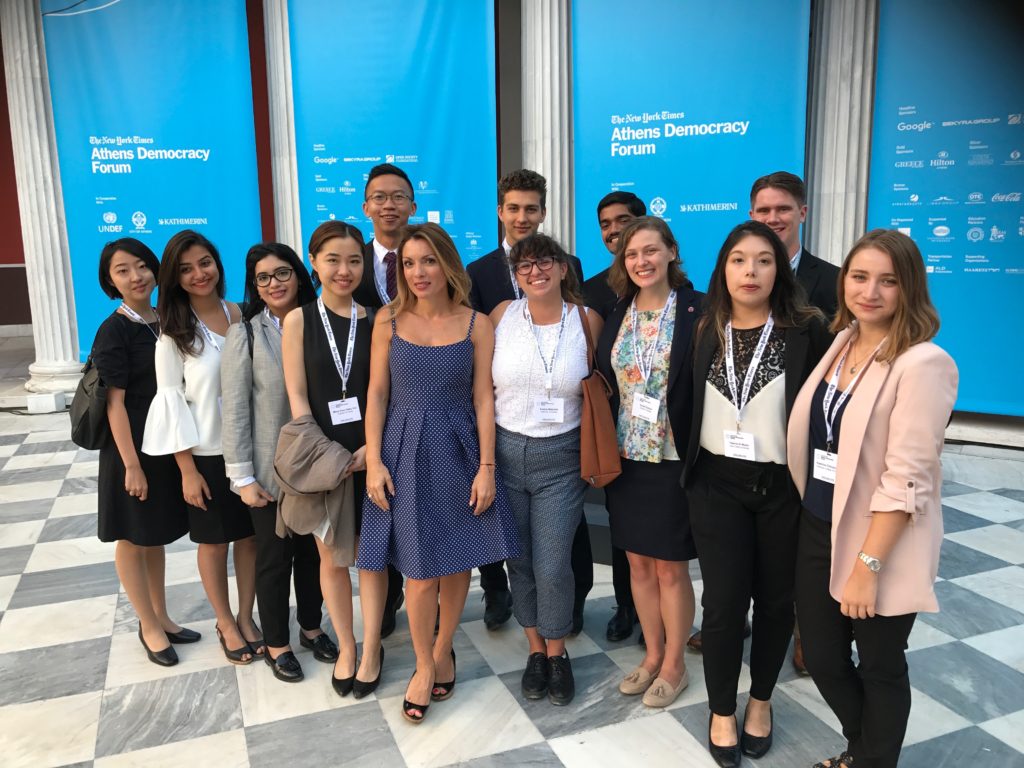 The girl from Saudi, Amana, was taking notes during the round table discussion I moderated on the Global Goals and economic inequalities. When I asked about her opinion on the fact that Saudi Arabia, one of the most misogynist nations on earth, is now a member of the UN Womens Commission she answered: ”I’ve never heard about this. They probably don’t want us to know. It’s a secret.”

After three days of conference in Athens some of us went to the most amazing resort, Costa Navarino, to discuss Film & Democracy. I shared a car with Ludek Sekyra from Chech Republic who writes a book on Reciprocity –focusing on global justice and altruism.The golden rule of reciprocity is to treat others as you want to be treated. So simple. And so hard.

At the ecofriendly Costa Navarino along with sea turtles caretta-caretta we enjoyed swimming, delicious lunches and magic dinners with great talks. 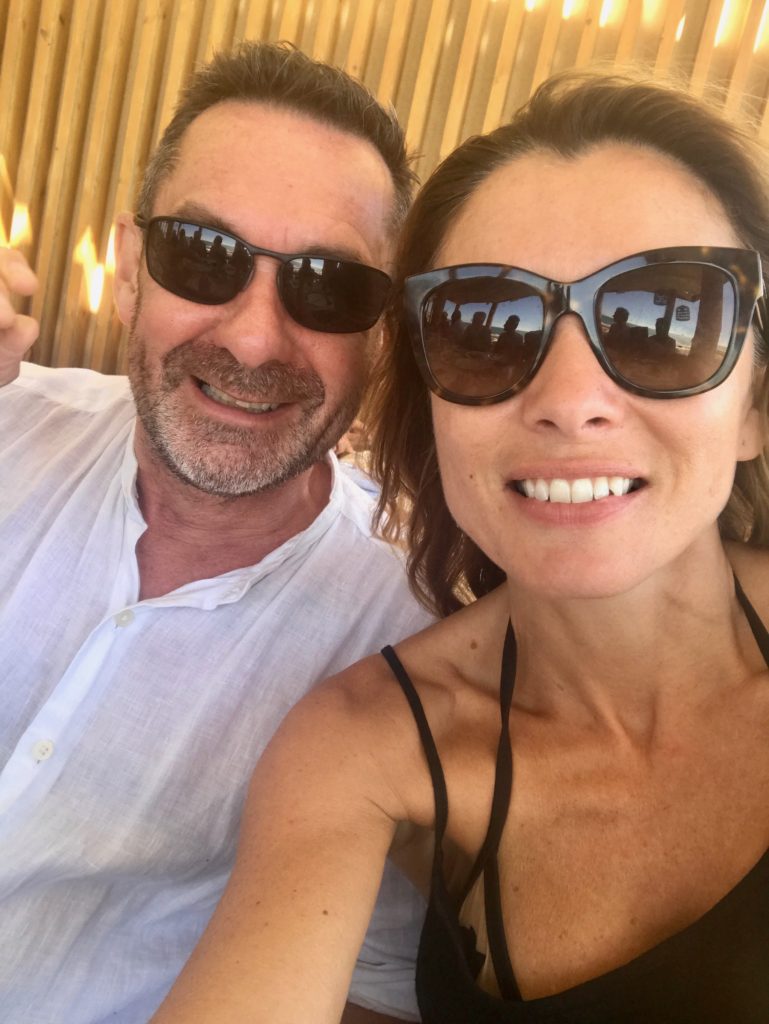 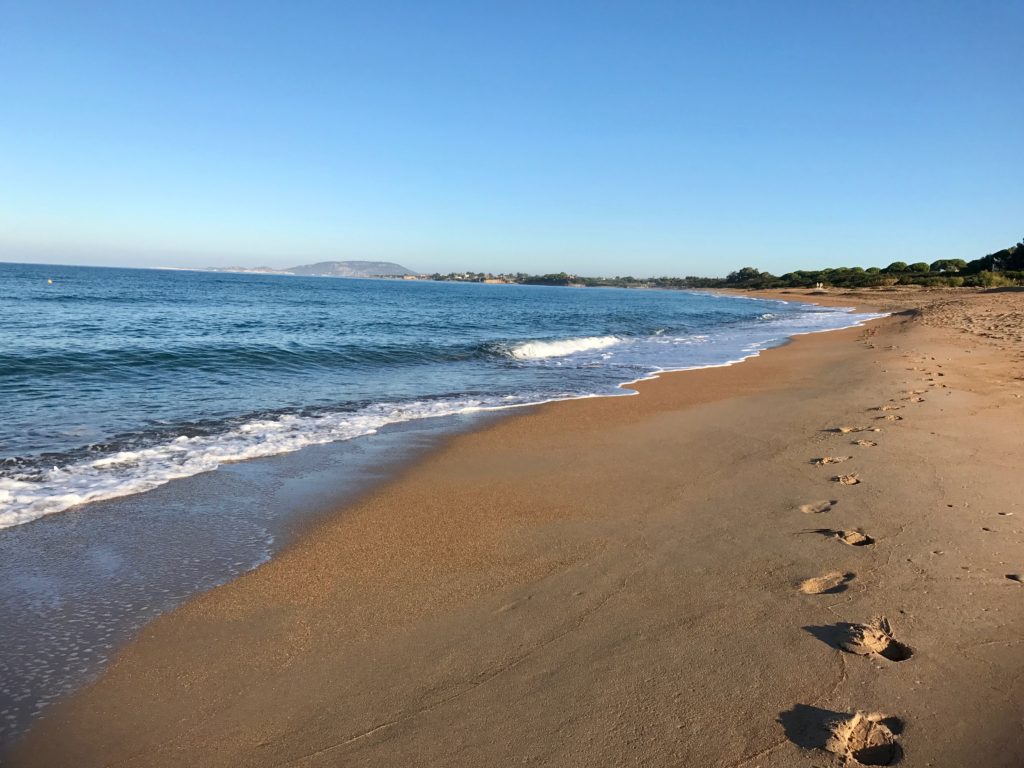 I was very enthusiastic to become instant friends with Paul Mason, the journalist, writer, filmmaker and playwright. We’ve done similar things during our lives and shared so many stories from Gaza to Greece, from theatre to documentaries. Paul also showed me his tattoo, in greek, the defiant lyrics by the 34-year-old rapper Pavlos Fyssas who was murdered by the neonazis in Golden Dawn. 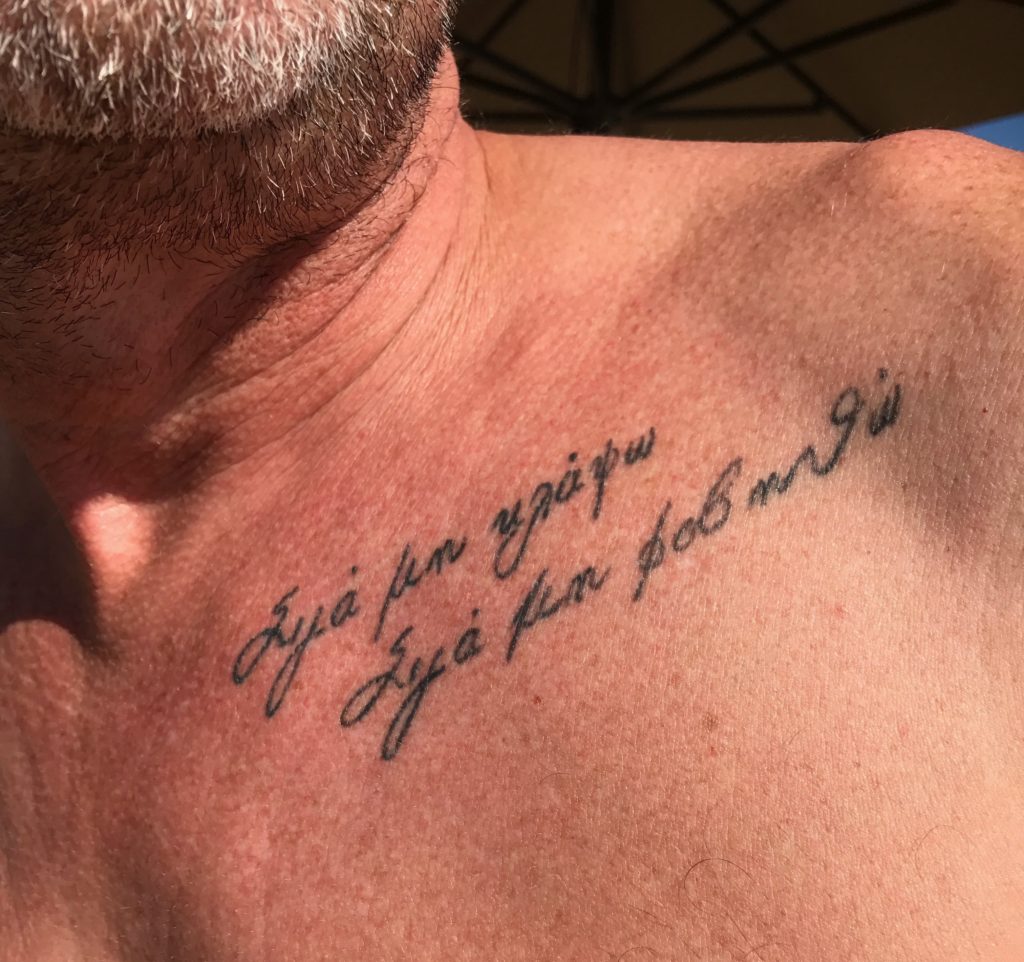 And here is the rest. Worth reading and reflecting on:

The world has become a big prison
and I’m looking for a way to break the chains.
There is a place waiting for me,
there at a high mountain peak for me to arrive.

That’s why I stretch again my two hands very high,
to steal some light from the bright stars.
I cannot take it down here and I’m about to choke
from this human misery, as much as sorrow.

I cannot stand it anymore and all these people were not for me,
so I followed another path and not the one they forced me to.
It was rough, tough and with many pitfalls,
bad love and friends like venomous vipers.
It had monsters with strange uniforms
always secretly lurking in the shadows.

Don’t stop if you decide to follow it,
tighten your teeth firmly and do not cry.
I took it myself and reached its end,
and as the old wise people write in books,
when the sun reaches its end,
eagles will light a fire from above.

They told me not to have “crazy” dreams,
not dare to look at the stars,
but I never took them seriously,
I took the whole world in my arms.

They want nowadays to build me a nest
where there’s more fear, ugliness
and a moaning cry and a heavy chain,
carrying the curse of the gods and blasphemy.

I will not shed a tear and I will not be afraid.
I will not let them steal my dreams.
I fly free, high, very high,
while they are jealous of my proud unbound wings.
And I’m waiting for other brothers to come here
in this mountain peak waiting for them all,
as long as they don’t cry and fear living in this well-thought-out fraud.